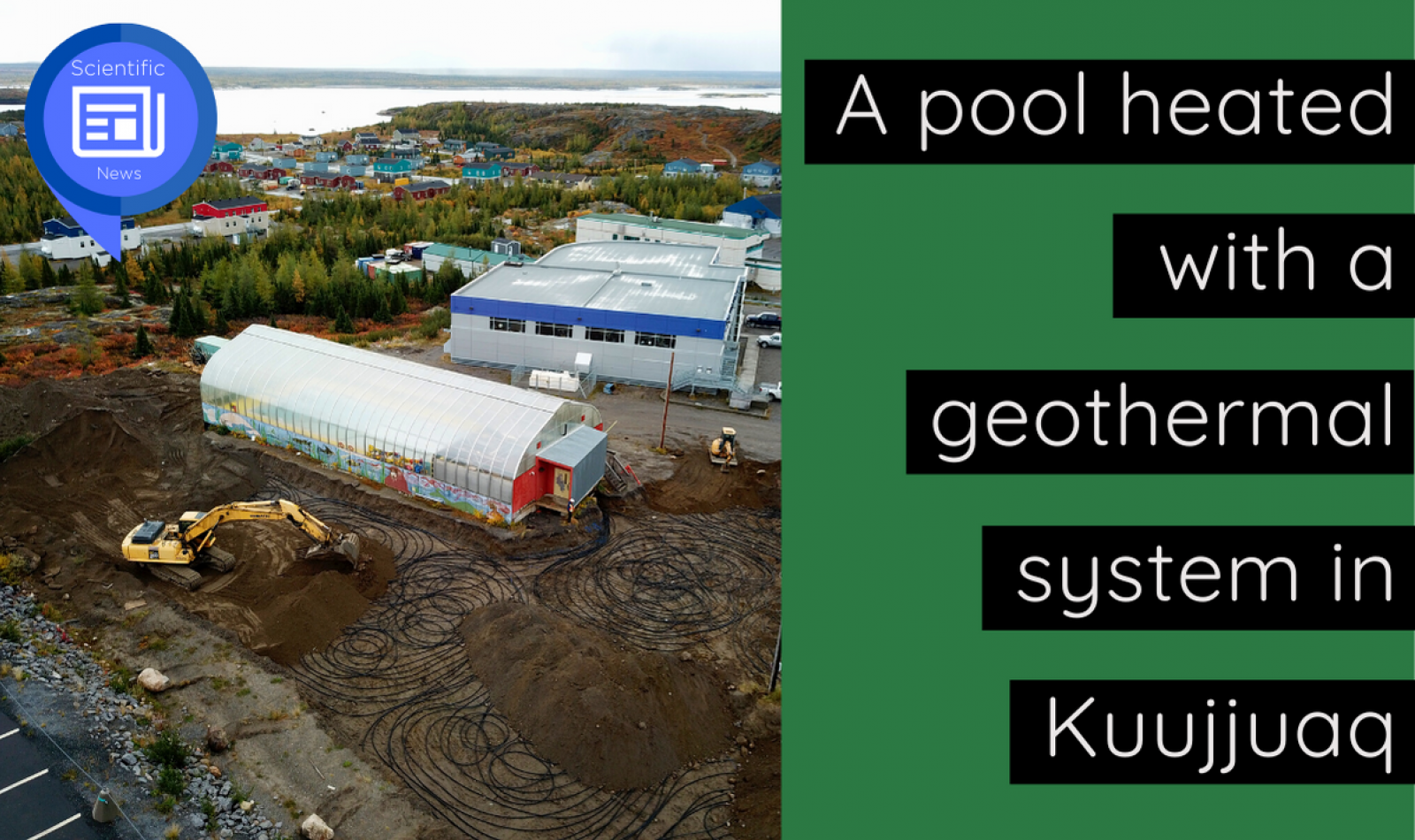 A pool heated with a geothermal system in Kuujjuaq

There is something counter-intuitive about the idea of heating a pool with geothermal energy in a region as cold as Nunavik and lacking in hot springs. However, it is becoming a reality in Kuujjuaq.

In Nunavik, as elsewhere, there is no need for hot springs to exploit the geothermal potential of the ground to heat a building or a pool. It is a matter of sending a heat-transfer fluid into the ground at a lower temperature than that of the ground to extract heat. More precisely, the fluid circulates in a geothermal loop that captures the heat of the ground. As it passes through a heat exchanger, the fluid transfers its heat to a refrigerant gas that is compressed by a heat pump. The compressed gas heats up further and another heat exchanger then transfers the heat energy to the building's heating system or in this case the pool water.

"The advantage of geothermal systems is that they rely on the use of local, consistent resources that are available in all Nunavik villages and can be an alternative to petroleum products," says Jasmin Raymond, a professor at INRS-ETE.

Until now, the Kuujjuaq pool has been heated by two diesel furnaces. The principle is there, but beyond the theory, does the soil of Kuujjuaq really have heat to give?

Field study
Jasmin Raymond holds the INQ Research Chair on the Geothermal Potential of the North. Five years ago, his team initiated work to study the geothermal potential in Kuujjuaq: "We monitored the ground temperature and analyzed soil samples to evaluate the thermal properties and demonstrate the technical viability of a geothermal heating project," he reports. During the summer, the ground temperature can reach 8 degrees. If the heat transfer fluid, which is made up of water and antifreeze, is sent into the ground at a temperature close to zero degrees, it will warm up. Knowing the heating needs, the temperature gradient between the fluid and the ground and the thermal properties of the ground, it is possible to calculate the length of the geothermal loop to be installed.

From the laboratory to the community
Jason Aitchison, the director of the Kuujjuamiut Corporation, which manages the Kuujjuaq sports complex, heard about this work. He had participated in the 20/20 Catalysts Program, a training developed to guide Indigenous communities in the development of renewable energy. "He wanted to implement a pilot project and naturally, we started working together on this project," says Jasmin Raymond, adding that while his team started the research, "it is really the community leaders who then carry out the project.

On the land adjacent to the pool, the ground was excavated and a 4 km long geothermal loop was installed horizontally at a depth of 1 m. Nunatech-Englobe, a consortium companies from Kuujjuaq and the South, carried out the excavation work while the heat pumps and heat exchangers were installed by Induktion Géothermie, a company from Quebec City.
These heat pumps obviously need electricity to operate, but Kuujjuamiut is also working on projects to install photovoltaic panels on nearby sports facilities to power the heat pumps. The pool water will then be heated entirely by renewable energy, although a diesel furnace will remain in operation as a backup system.
The Kuujjuaq pool is only open to the public during the summer months and the work should be completed by the summer of 2022. The project team will then track the system's energy consumption, operating costs and reductions in greenhouse gas emission. "If we want this to be useful for the energy transition, it's not enough to reduce energy consumption and the bill," remarks Jasmin Raymond.

Next, the gymasiums
If the demonstration is successful, the pool could open the door to other, more ambitious projects.

We started with the pool, which is only used in the summer, but our research shows that heat pumps could be used year-round in the North even if the ground temperature is colder. Phase 2 of the project would be to install a geothermal system to heat and cool the Kuujjuaq Forum sports facilities," says Jasmin Raymond.

The Forum has gyms that need to be heated as well as an arena where the ice needs to be cooled. Of course, in winter, the ground freezes and the temperature drops below zero. The geothermal loop would have to be installed at a depth of more than 1 m. It will be necessary to penetrate deeper into the ground to find a temperature higher than zero. So, the loop would be vertical rather than horizontal. "We think that we would be able to install a geothermal system with vertical exchangers 100 to 150 meters deep where the average temperature would be 1 to 2 degrees Celsius," anticipates Jasmin Raymond.
Kuujjuaq would then be a pioneer in northern geothermal energy and could set an example for other Arctic communities.

Information about the researcher

Jasmin Raymond is a professor at INRS and holds the INQ Northern geothermal potential research chair. He is also the scientific leader of Geothermal Open Laboratory.

A word from the Director of the INQ, Jean-Éric Tremblay

Energy autonomy and efficiency are two important issues for Institut Nordique du Québec (INQ), whose scientific mission is to support the sustainable development of the North in partnership with its communities.

Since the large hydroelectric power plants were built in the "North", one might think that it would be relatively simple to connect them to Nunavik’s 14 villages. However, the distance between many of these villages and the La Grande complex, for example, is often greater than or equal to the distance between La Grande and the major cities to the south. Since it would be very complicated and unprofitable, in purely economic terms, to build and operate the infrastructure required to deliver electricity throughout the North, the communities and businesses that draw resources from the territory must rely on local solutions for energy production.

For a long time, there has been a heavy dependence on diesel fuel. However, the use of this fossil fuel is not without its challenges, as it requires a seasonal supply by boat and can lead to significant contamination of coastal waters or soils from which communities draw their drinking water. To support the transition to cleaner local energies, INQ established a working group on new and renewable energies.

Professor Jasmin Raymond's work, funded in part by INQ, is a key element of this transition since geothermal energy makes it possible to exploit a clean energy source that is already abundantly present in the ground. The pilot project to heat the Kuujjuaq pool is a good example of the innovations possible in the field of northern geothermal energy, which may one day permit the electrification and heating of many facilities in the Far North.

- Jean-Éric Tremblay, Director of the INQ

Scientific publications related to the project

Cover photo by Jason Aitchison - Aerial view, taken by drone, of the excavation and installation of the geothermal loop.